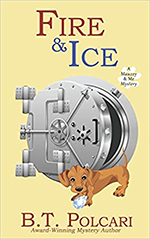 Fire & Ice is a mystery with enigmatic ciphers, perplexing coded messages, a massive flawless diamond, and a fabled lost treasure galleon. The protagonist, Sara Donovan, is a quirky college student working as an archivist intern in a museum vault that also contains a smaller valuables vault.

After a brief power outage, Sara is convinced a 175-carat diamond was stolen from the valuables vault and replaced with a fake, despite zero supporting evidence of a heist. Nobody believes her so she launches her own investigation and finds an obscure magazine article theorizing the museum’s deceased benefactor’s immense wealth was linked to a mythical Spanish treasure galleon. When she discovers three journals of the benefactor are also missing from the valuables vault, Sara concludes these were stolen along with the diamond. Ultimately Sara correctly identifies the exhibit’s security director as the heist’s mastermind, who recruited an all-star crew to surreptitiously drill the vault and steal the journals for him, with the diamond being their payment. The journals were the keys to a complex book cipher created by the benefactor that, when married to a coded message in his will, pointed to where the treasure was hidden. With the help of her best friend, cryptanalyst father, and mathematician brother, Sara solves the riddle and finds a nearly three-billion-dollar treasure in a cave beneath a stable on the benefactor’s estate.