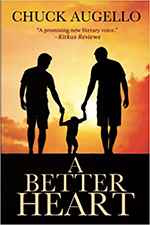 For aspiring indie filmmaker Kevin Stacey, it's another day on the set of his first film, but when his estranged father, a failed Hollywood actor, arrives unexpectedly with a bundle of cash, a gun, and a stolen capuchin monkey, he's propelled toward the journey that will change his life.

The monkey, Henry, has been liberated from a research lab by animal rights activists. Inspired by his friend Veronica to reevaluate his relationship with other species, Kevin learns about the pain and suffering inflicted on lab animals as he forges a bond with the capuchin. When father and son embark on a road trip with Henry, Kevin is caught between the egocentric father who abandoned him and the temperamental monkey whose fate is in his hands. With both the FBI and his mother's ghost watching, will Kevin risk his career and his father's freedom to bring the stolen monkey to safety? Meanwhile, Veronica's encounter with an eccentric Catholic priest triggers her own journey toward change.

A heartbreaking yet comic family drama, A Better Heart examines the human-animal bond and the bonds between fathers and sons, challenging readers to explore their beliefs about the treatment of non-human species.

The Line Becomes a River

I met the author at the “NONFICTIONNOW” conference late last year where over 400 non-fiction writers, teachers, and readers from around the world gathered to explore the past, present and future of nonfiction. Cantu was the keynote speaker and was interviewed at the iconic Orpheum Theater in downtown Phoenix.

Listening to Cantú, it became obvious that the border was in the blood: his mother, a park ranger and daughter of a Mexican immigrant, raised him in the scrublands of the Southwest. Driven to understand the hard realities of the landscape he loves, Cantú joined the Border…